We report the first complete theoretical description of the chain of elementary reactions resulting in chromophore maturation in the green fluorescent protein (GFP). All reaction steps including cyclization, dehydration, and oxidation are characterized at the uniform quantum mechanics/molecular mechanics (QM/MM) computational level using density functional theory in quantum subsystems.

Starting from a structure of the wild-type protein with the noncyclized Ser65-Tyr66-Gly67 tripeptide, we modeled cyclization and dehydration reactions. We then added molecular oxygen to the system and modeled the oxidation reaction resulting in the mature protein-bound chromophore. Computationally derived structures of the reaction product and several reaction intermediates agree well with the relevant crystal structures, validating the computational protocol. The highest computed energy barriers at the cyclization–dehydration (17 kcal/mol) and oxidation (21 kcal/mol) steps agree well with the values derived from the kinetics measurements (20.7 and 22.7 kcal/mol, respectively). The simulations provide strong support to the mechanism involving the cyclization–dehydration–oxidation sequence of the chromophore’s maturation reactions. The results also establish a solid basis for predictions of maturation mechanisms in other fluorescent proteins.

Photoinduced reactions play an important role in the photocycle of fluorescent proteins from the green fluorescent protein (GFP) family. Among such processes are photoisomerization, photooxidation/photoreduction, breaking and making of covalent bonds, and excited-state proton transfer (ESPT). Many of these transformations are initiated by electron transfer (ET). The quantum yields of these processes vary significantly, from nearly 1 for ESPT to 10–4 – 10–6  for ET. Importantly, even when quantum yields are relatively small, at the conditions of repeated illumination the overall effect is significant.

Depending on the task at hand, fluorescent protein photochemistry is regarded either as an asset facilitating new applications or as a nuisance leading to the loss of optical output. The phenomena arising due to phototransformations include (i) large Stokes shifts, (ii) photoconversions, photoactivation, and photoswitching, (iii) phototoxicity, (iv) blinking, (v) permanent bleaching, and (vi) formation of long-lived intermediates. The focus of this review is on the most recent experimental and theoretical work on photoinduced transformations in fluorescent proteins. We also provide an overview of the photophysics of fluorescent proteins, highlighting the interplay between photochemistry and other channels (fluorescence, radiationless relaxation, and intersystem crossing). The similarities and differences with photochemical processes in other biological systems and in dyes are also discussed. 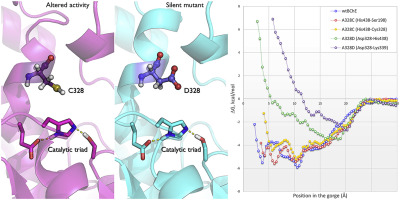 Conformational dynamics of wild-type human butyrylcholinesterase (BChE), two mutants of residue Ala328, the catalytically active Ala328Cys, and the catalytically inactive (silent) Ala328Asp, and their interactions with butyrylcholine were studied. The aim was to understand the molecular mechanisms by which point mutations may lead to silent BChE variant or alter catalytic activity. Importance of BChE natural variants is due to medical consequences, i.e. prolonged apnea, following administration of the myorelaxant esters, succinylcholine and mivacurium.

Comparison of molecular dynamics (MD) simulations for the three model systems showed that: 1) the active mutant Ala328Cys mutant has some changes in configuration of catalytic residues, which do not prevent binding of butyrylcholine to the active site; 2) in the naturally-occurring silent variant Ala328Asp, the Asp328 carboxylate may either form a salt bridge with Lys339 or a H-bond with His438. In the first case, the Ω-loop swings off the gorge, disrupting the π-cation binding site and the catalytic triad. In the second case, binding of cationic substrates in the catalytic center is also impaired. MD simulations carried out in 0.15 M NaCl, close to physiological ionic strength conditions, favored the second situation. It was seen that Asp328 forms a H-bond with the catalytic triad His438, which in turn disrupts the catalytic machinery. Therefore, we concluded that the Ala328Asp variant is not catalytically active because of that dramatic event. Computational results, consistent with in vitro biochemical data and clinical observations, validate our MD approach.

To support this conclusion we identify binding sites of NAA at the hAsp dimer including those on the protein surface (activating sites) and at the dimer interface (inhibiting site). Using the Markov state model approach we demonstrate that population of either activating or inhibiting site shifts the equilibrium between the hAsp dimer conformations with the open and closed gates leading to the enzyme active site buried inside the protein. These conclusions are in accord with the calculated values of binding constants of NAA at the hAsp dimer, indicating that the activating site with a higher affinity to NAA should be occupied first, whereas the inhibiting site with a lower affinity to NAA should be occupied later. Application of the dynamical network analysis shows that communication pathways between the regulatory sites (activating or inhibiting) and the gates to the active site do not interfere. These considerations allow us to develop a kinetic mechanism and to derive the equation for the reaction rate covering the entire NAA concentration range. Perfect agreement between theoretical and experimental kinetic data provides strong support to the proposed catalytic model.